Usually, the parts lists are generated from an ERP or CAD system and have to be imported into intelliDivide afterwards. Depending on whether a saw or a CNC machine is involved, the files to be imported differ.

You start the configuration of the import by importing the first parts list.

In principle, the formats csv, pnx, xlsx, xls and ptx can be imported. The maximum file size of a file can be up to 50 MB.

Tip: You can also upload a compressed zip file containing the list.

Import of a parts list (Excel format in the example)

During the first import, you have to create an import template (this is also required for intelliDivide Nesting) and perform a data mapping because the systems used by the users are heterogeneously structured. The assignment of data elements is unique, after that intelliDivide remembers the assignment once created.

intelliDivide also supports you in assigning or creating the import template. intelliDivide already recognizes many facts automatically during import. In this case, for example, that it is an Excel file with the file extension xlsx and the encoding is in Unicode (UTF-8) format.

Under Name you can choose any name you like. If the import function has recognized the file type incorrectly, you can change the type to CSV or PTX in the drop-down field.  The encoding can also be switched under Format, e.g. to ISO code, ASCII or to a Japanese or Chinese font.

You can choose in which line the import should start (possible entries are 1 to 15). This option is important for customers whose system outputs the parts lists with additional information at the beginning of the list that is not needed for the calculation of the optimization solution.

By confirming Contains headings, the first line of the table to be imported is used as headings. If intelliDivide does not recognize these headings automatically or in the correct order, please add them using the respective drop-down fields. 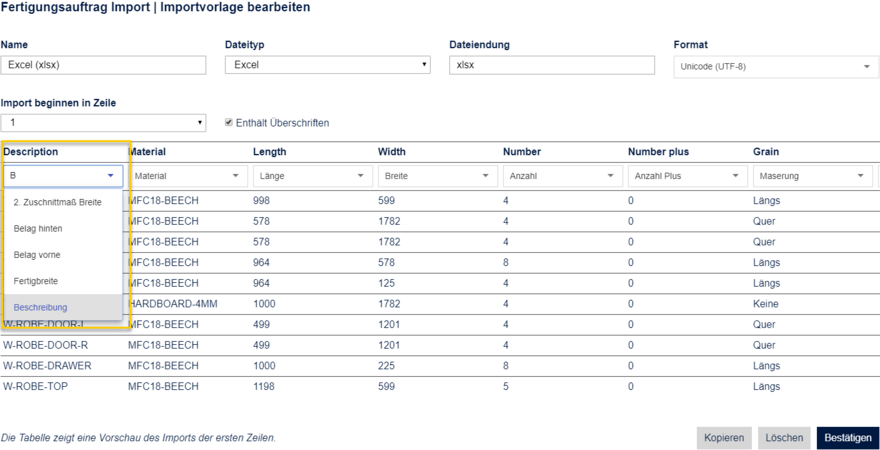 Assigning the columns of the imported file to part properties

After each assignment made, a preview for the column is displayed. 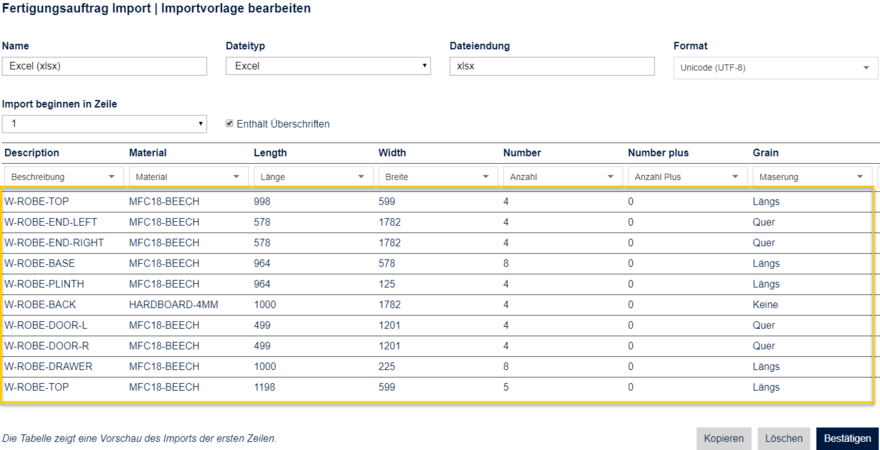 Assignment of all relevant columns

Once the mapping is complete, the configuration can be saved by clicking on Save.

Afterwards a preview of the first lines is displayed.

If necessary, the template can be edited again.

If the results meet your expectations, the content can be imported by clicking on Import. 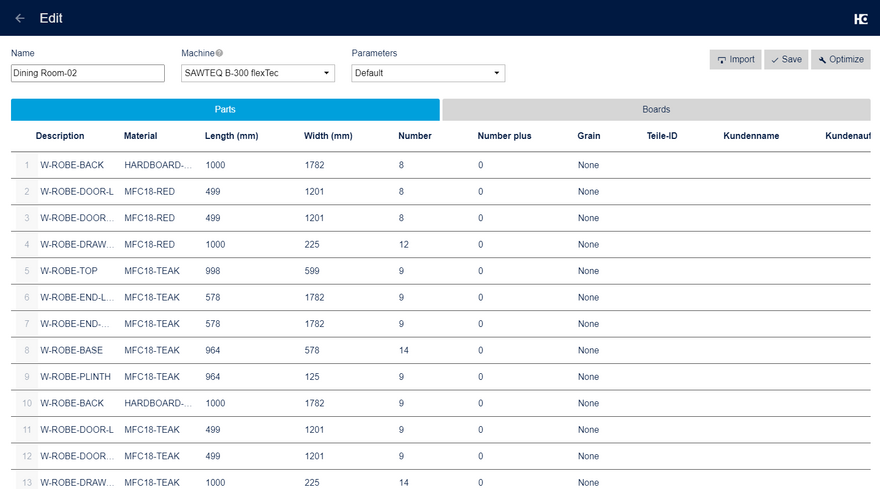 The name of the imported file is used as the optimization name.

The configuration of the import for Nesting is similar to the procedure for Cutting.

In the file selection dialog box, you simultaneously mark all files to be imported. The easiest way to do this is to use the key combination CTRL+A.

It is also possible to import a ZIP file containing these files. 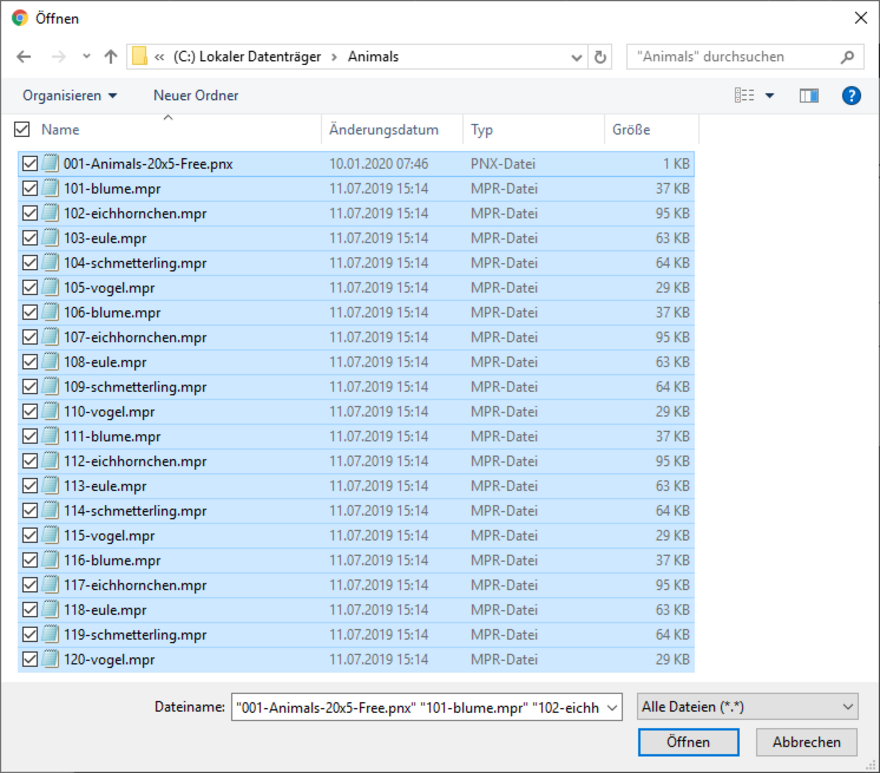 intelliDivide automatically detects correlations between the control file and the naming of the MPR(X) files.

In the example the MPR(X) files are named according to the description (1). 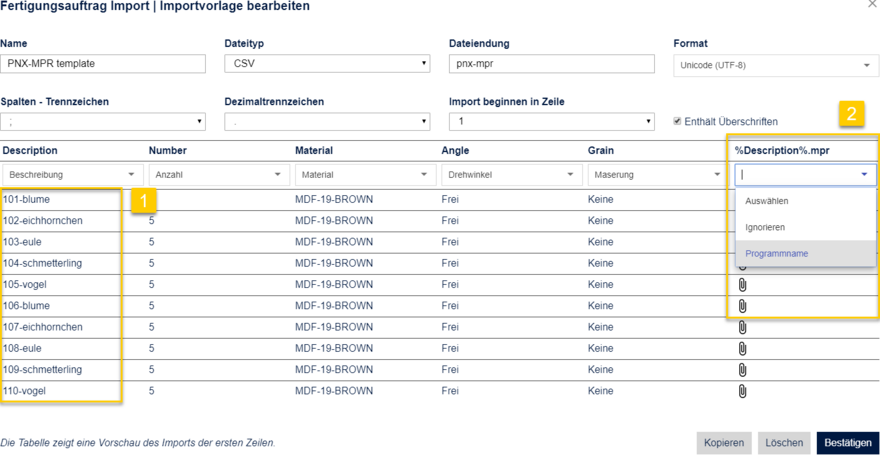 Assign the property Program name to the recognized relationship %Description%.mpr (2).

You can check the assignment in the preview. After confirmation, the part information and the programs are transferred to the part list.

The configuration of the import is only necessary once. In the following step, the preview is displayed directly for import.

With the button MPR(X) import you can import single or multiple MPR(X) files for your optimization task in one step.

In the file selection dialog, mark all files to be imported at the same time. The easiest way to do this is to use the key combination CTRL+A. 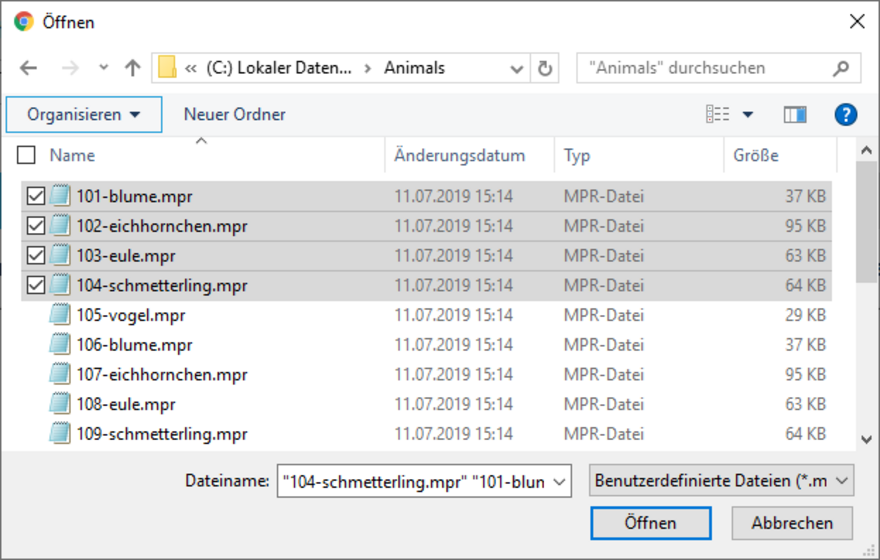 The selected programs are transferred directly to the parts list.

The material and, if necessary, the number of parts must be adjusted afterwards.

Creating an optimization Editing data Entering of board data

We use cookies on our website. Some of them are essential, while others help us to improve and operate our online offer for you economically. You can "Accept" this or click on the "More information" button to select which cookies we may use.